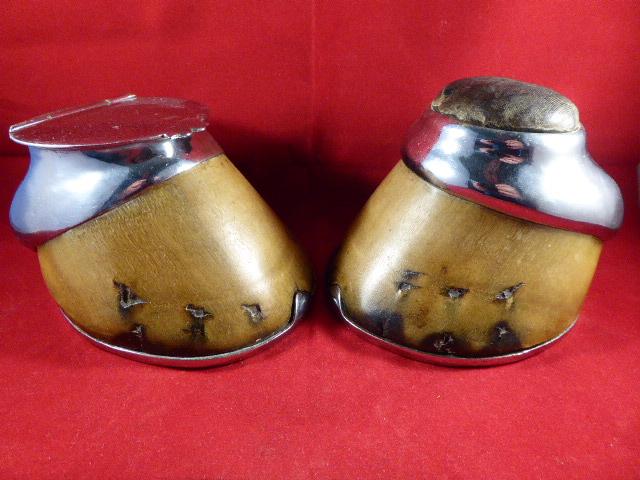 Here on offer is a fine and impressive “antique desk set” comprising of a silver plated horse hoof inkwell and very RARE ink nib wipe, circa 1880.

Both items have been made from a horse's hoof with silver plate mounts and a plated horseshoe, and I would say they originated from the same horse.

I have seen a number of horse hoof inkwells over the years, but NEVER an... read more 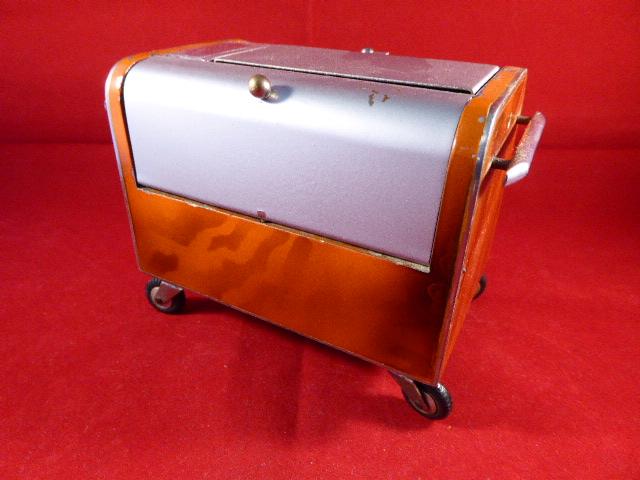 Vintage Orange Marbled Effect Cigarette Holder, Ashtray and Lighter in the form of a Street Food/Ice Cream Cart by BAIER of Germany

Here on offer is a rare example of vintage orange marbled effect cigarette holder, ashtray and lighter in the form of a street food/ice cream cart from the 1950’s.

This is a BAIER Ges-Gesch, German made smoking trolley/cart featuring storage for 20 cigarettes (10 each side), petrol lighter and an ashtray.

The paint finish is orange faux marble, with a silver top an... read more 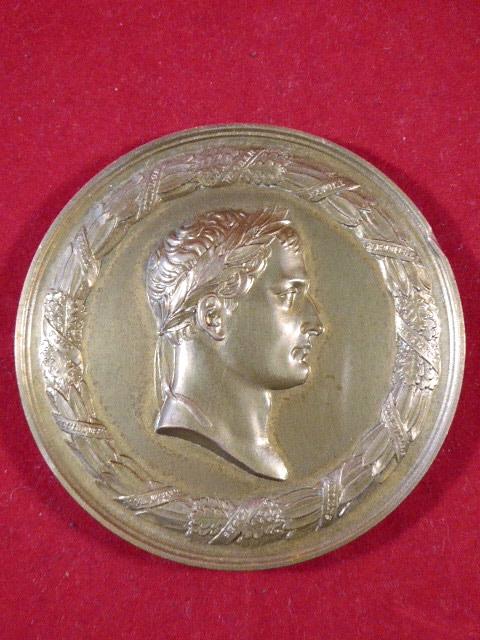 Here on offer is a large bronze medal that was issued by France to commemorate Napoleon's Death on St Helena, 5th May 1821.

This finely detailed medal was minted in Paris in 1821.

On the obverse it depicts:

The laureate head of Napoleon facing right, set within a closed wreath, that has ribbons with the names of his famous victory battles, such as Ri... read more 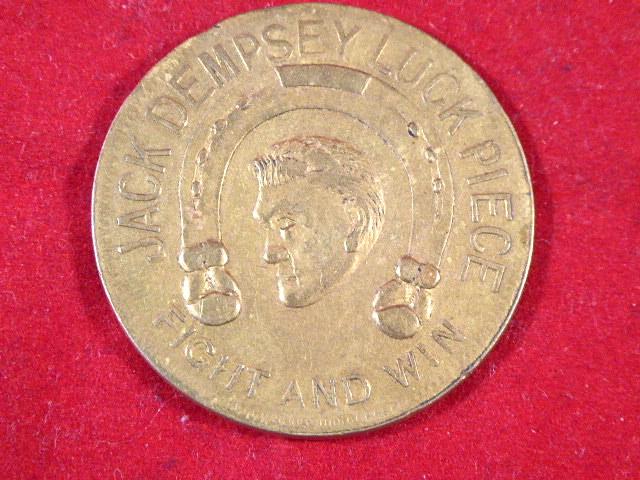 On the front there is the image of Jack Dempsey, surrounded by a large horseshoe.

Around the inner edge are the words:

On the reverse are the words: 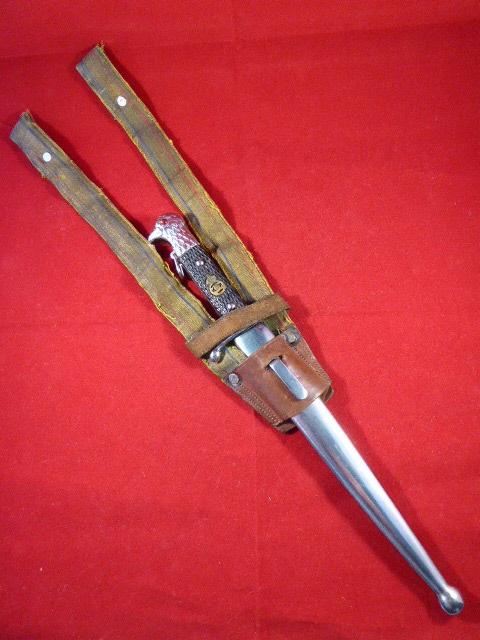 Here on offer is a WW2 Romanian Army dagger with scabbard and rare hanging straps.

There is no maker mark on this dagger as is common with these Romanian daggers.

The hilt fittings are all chrome-plated an in excellent condition, showing no signs of rust or pitting.

The ornate pommel is in the shape of an eagle’s head and it still retains its origina... read more 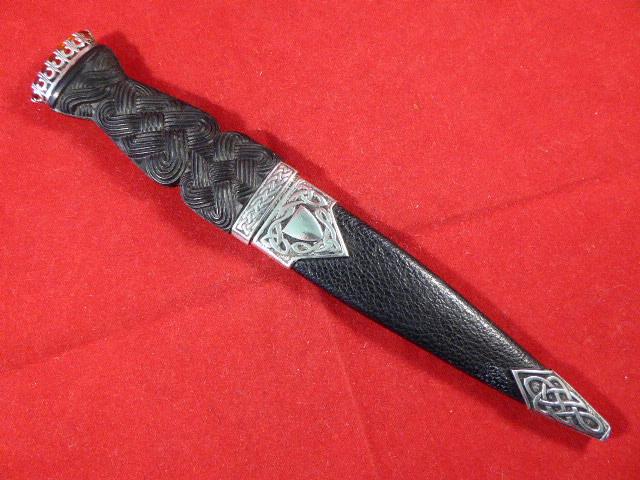 Here on offer is a fine example of a vintage Scottish Sgian Dubh with solid silver fittings that where made by the Edinburgh silversmith, Thomas Kerr Ebbutt, dated to 1956.

The hilt has a beautiful hand carved ebony wood grip with an interlaced design that is topped with a silver crown pommel set with a beautiful undamaged yellow cairngorm stone.

At the base of the... read more 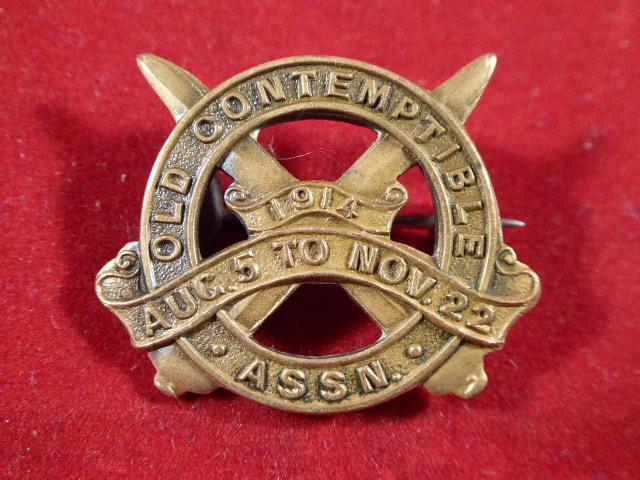 Here on offer is a rare early ‘first version’ of a WW1 1914 Old Contemptible Association Veterans Badge, circa 1927

This one has the early issue number 620 stamped on the reverse.

The badge itself seems to be made from a copper alloy. On the front it has crossed swords that pierce a circular banner that has in raised letters the words: 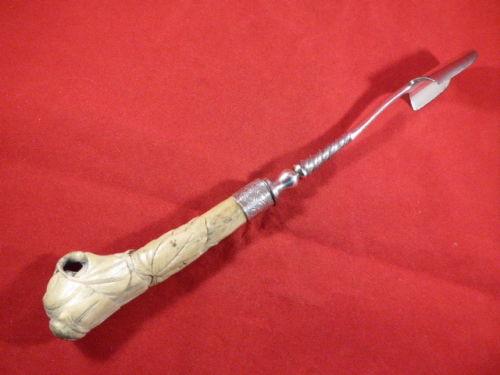 The metal scoop and twisted stem are silver plated and are connected securely in place to the handle, by an ornate silver ferrule. 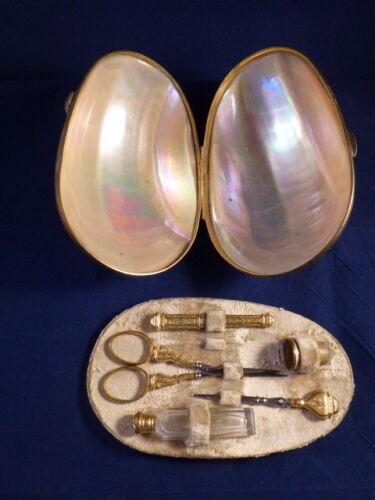 Palais Royal is a term used to describe, not a single manufacturer, but to a name given to a small area around the Royal Palace that specialized in producing small elaborate works of art and gifts in the 18th and 19th centuries. Often they produced sewing tools and the... read more 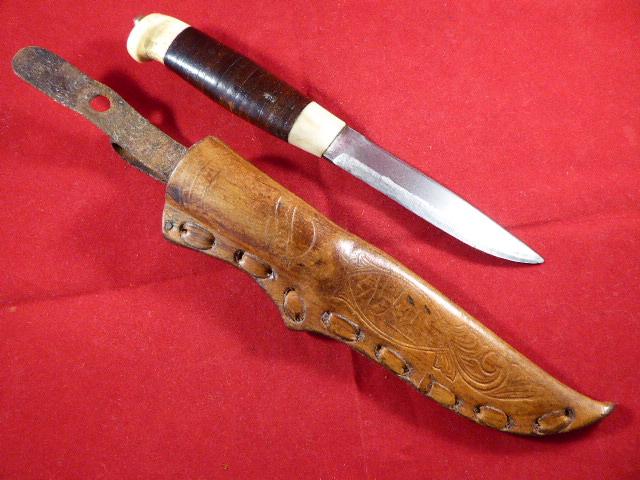 Here on offer is a vintage Norwegian knife by S. & S. HELLE, the world famous knife manufacturers from Holmedal in Norway.

I believe this type was known as a Mountain Knife, which where made in several sizes. This is 7.75” knife is one of the smaller versions known as a “Woman’s knife”.

The grip is made from compressed sections of dark leather rings with a smooth s... read more