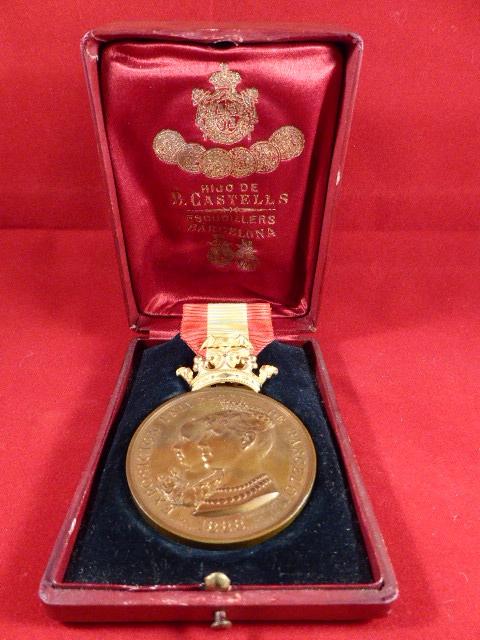 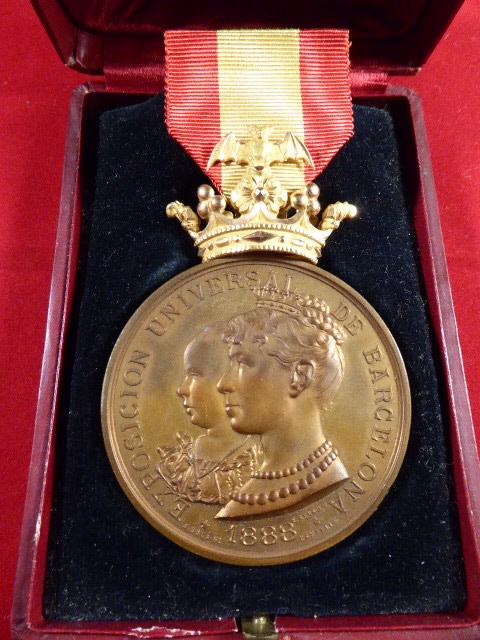 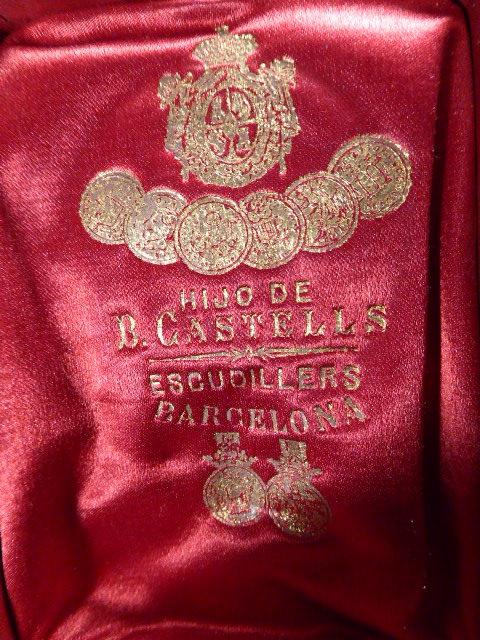 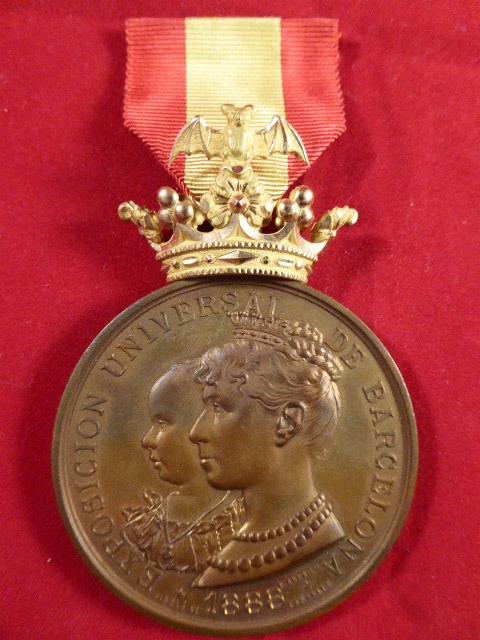 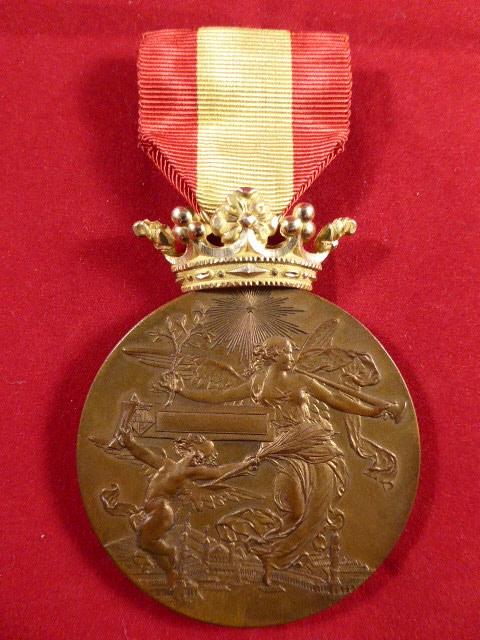 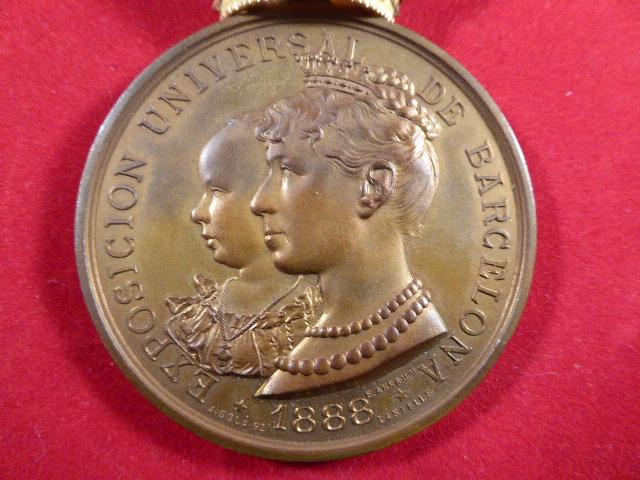 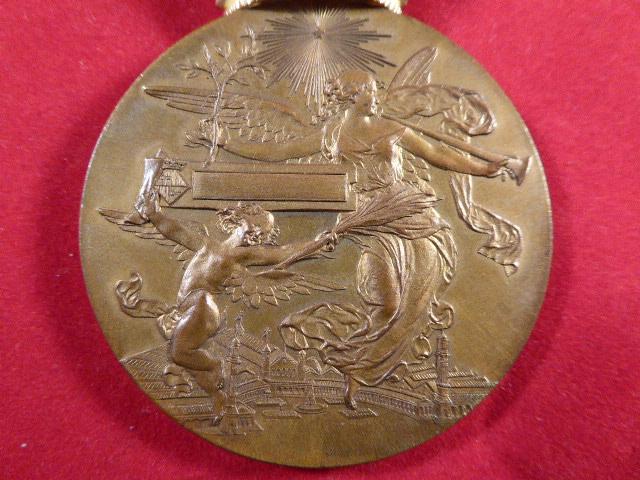 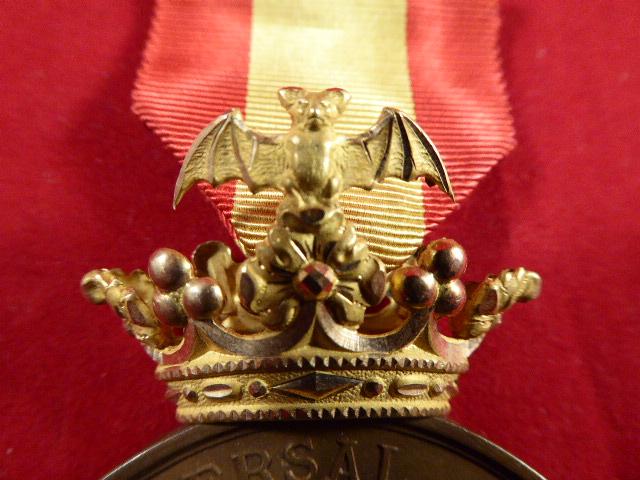 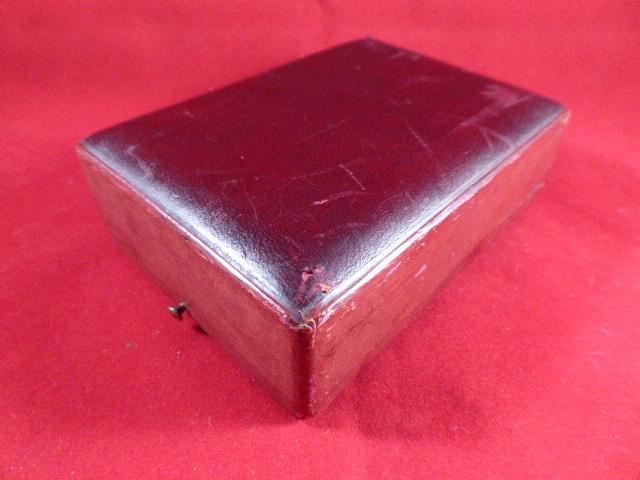 Here on offer is a fine Kingdom of Spain, Alfonso XIII award medal with the rarely seen Gold Crown made to celebrate the Barcelona Universal Exhibition in 1888.

This near mint example comes with its original fitted red leather covered case.

Hijo De B. Castells
of Barcelona

The large bronze medal shows on the obverse:

The centre depicts the heads of the queen and her daughter and it is stamped in small rasied letters with the maker/designer J. SOLA 6 ° - E. ARNAUM. - CASTELLS.

On the reverse is a blank cartridge bearing the Royal Barcelona shield, between a cherub holding a palm tree and an antique draped and winged woman, holding a waterspout and a laurel branch, all under a radiant star.

There is a view of the Barcelona Exhibition Hall at the bottom.

The medal retains its original ornate hanger in the shape of a beautiful gold crown topped with a bat (Crown of Valencia) and a short Spanish yellow and red striped silk ribbon.

Some relevant history about ALFONSO XIII

Alphonse XIII (17/05/1886-28/02/1941) is the posthumous son of Alfonso XII (1857-1885) and Marie-Christine of Austria (1858-1929). His reign began under the regency of Marie-Christine. In 1898, after a short war (1895-1898) against the United States, Spain lost Cuba and the Philippines. In 1906, Alphonse wife Victoria Eugenie of Battenberg (1887-1969), granddaughter of Victoria I. Neutral during the First World War, Spain catches up its economic backwardness. After the dictatorship of General Primo de Rivera between 1923 and 1930, the insurrection broke out in 1931. Alfonso left Spain, but never abdicates. The Republic is proclaimed and five years later the Civil War broke out. It lasts three years and cost more than a million dead. Alfonso XIII died in exile in Rome.

Thanks for taking the time to look.