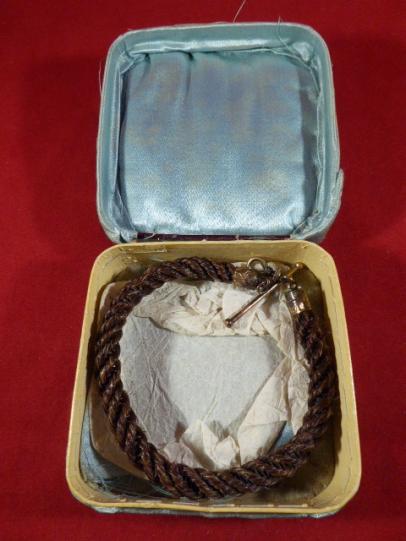 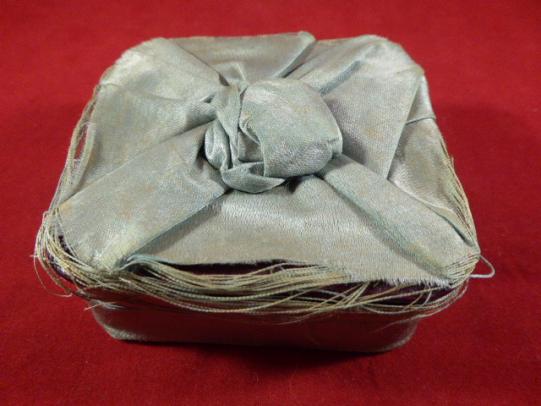 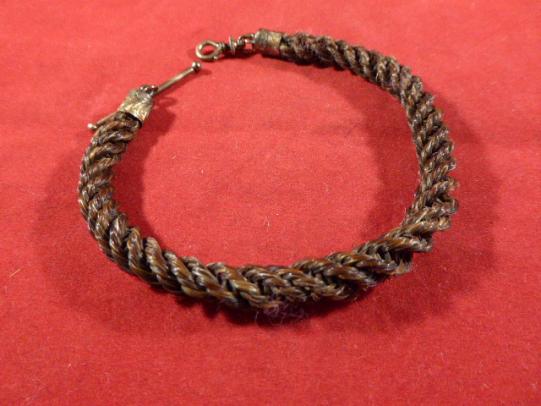 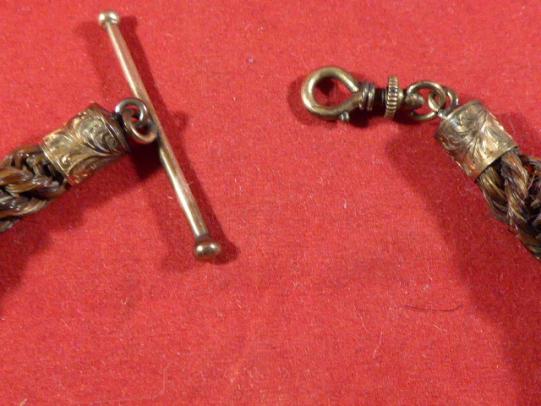 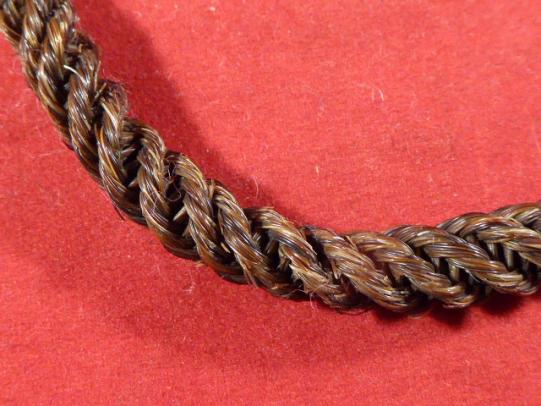 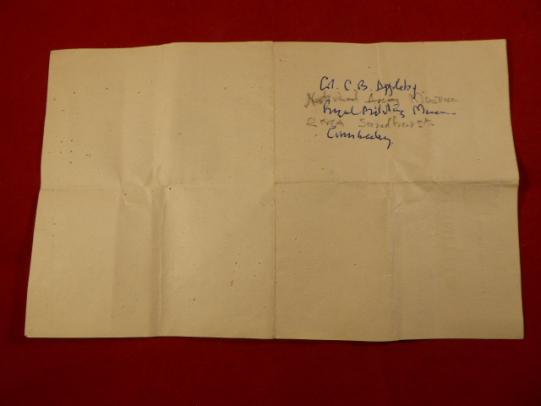 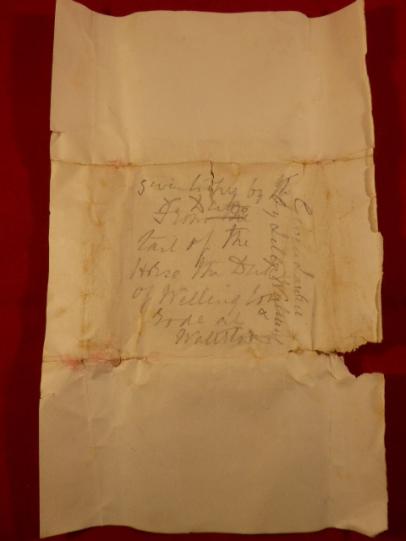 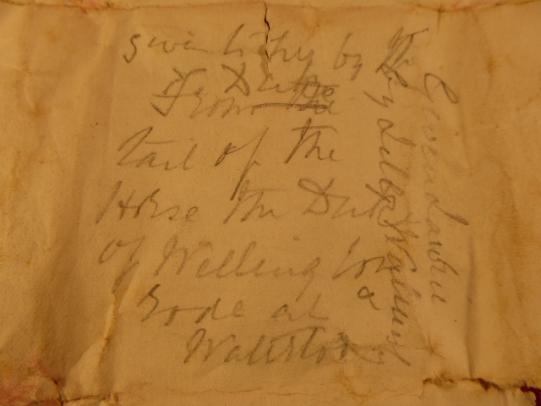 Here on offer is a very unusual and rare Horsehair Bracelet was made from the hair of the tail of the Duke of Wellington's horse, ‘Copenhagen’ that he rode at the famous Battle of Waterloo in 1815.

This came into my possession form a lady in Hampshire, who lived near Stratfield Saye House.

The Bracelet comes in its original square light blue silk covered box that has wear and splits to the top edges of the silk.

The Bracelet itself is made from finely plaited hair and has ornate gilt or gold mounts and clasp.
When stretched out straight it measures 8” (20.3cm)

It also comes with a hand written note in pencil that is not that easy to read, but I can make out the following:

'Given (.?.) by Lady Wellesley' and 'From tail of the Horse the Duke of Wellington rode at Waterloo'.

The note has been folded and would have been fitted inside the bottom of the box, I believe.

Catherine Sarah Dorothea Wellesley, Duchess of Wellington was the wife of the 1st Duke of Wellington. She was commonly known as Kitty Pakenham.

There is also a letter from the Wellington Museum from 1961, that helps confirm the providence of the Bracelet, but is a bit confusing, although the fact that the then Duke of Wellington saw the same coloring in this bracelet as in other items made from Copenhagen's hair is really positive and encouraging.

I think the name written is: 'Lady Wellesley' and not Walmsley, which would be a relation of the then Duke of Wellington.

The letter mentions the date 1866, but I cant see any sign of that date on the note or box?

Copenhagen (1808 – 12 February 1836) was the Duke of Wellington’s warhorse, which he most famously rode at the Battle of Waterloo.
Copenhagen was of mixed thoroughbred and Arabian parentage, with his dame being sired by the Epsom Derby winner John Bull and his sire Meteor finishing second in the Derby. Copenhagen was foaled in 1808 and was named in honour of the British victory at the Second Battle of Copenhagen.
Copenhagen did race in England for a short period, winning two races and finishing at least third in nine races out of his 12 career starts. Copenhagen was sent to Spain with Sir Charles Vane in 1813 and was then sold to the Duke of Wellington. Becoming his favourite, Copenhagen was the Duke's mount in the Battle of Waterloo. The horse was retired to the Duke's estate Stratfield Saye House and lived there for the remainder of his life, dying on 12 February 1836 at the age of 28 years. His gravesite is marked with a marble headstone that is situated under a 174-year-old Turkey Oak.

Wellington rode Copenhagen in a number of battles. Before Waterloo he took him on his hazardous ride to Wavre to liaise with Marshal Blucher. Copenhagen was the Duke's mount during the Battle of Waterloo, carrying him for 17 hours continuously during the battle. Immediately after the battle, from which Wellington emerged uninjured, Wellington dismounted and patted Copenhagen on the flank, causing the horse to kick towards the Duke's head, which the Duke narrowly avoided!

The Duke continued to ride Copenhagen in parades and other ceremonial events after the battle.

HAIR FROM THE HORSE WAS MADE INTO JEWELLERY.

The horse was retired to the Duke's Stratfield Saye House and lived as a pensioner there for the remainder of his long life. Copenhagen was said to, "like being noticed" and "kissed hands and ate his apples with all possible grace."

This is a real rare opportunity to obtain a fine piece of jewellery made from Wellington’s horse, Copenhagen.

It warrants further research, but would be of great interest to a collector of memorabilia of both Wellington and the Age of the Napoleonic Wars.

The Bracelet has been independently appraised by the online antique experts at “Value My Stuff” and they have provided an insurance valuation of £2000.

A copy of the certificate/appraisal will be provided to the buyer.


Please see my pictures for the details of the condition, which complement this description.