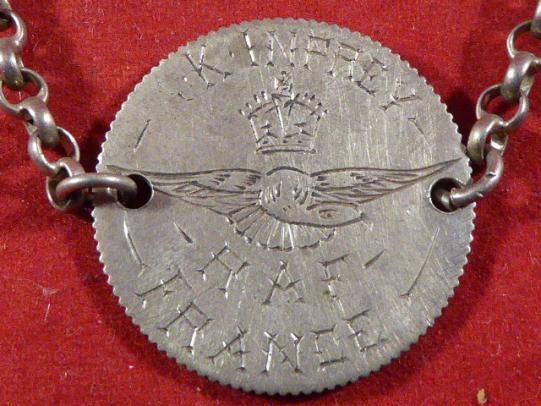 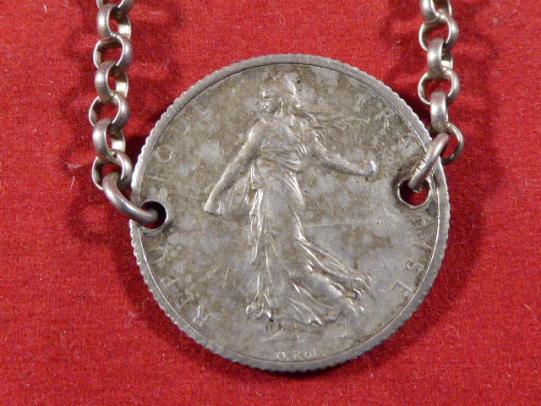 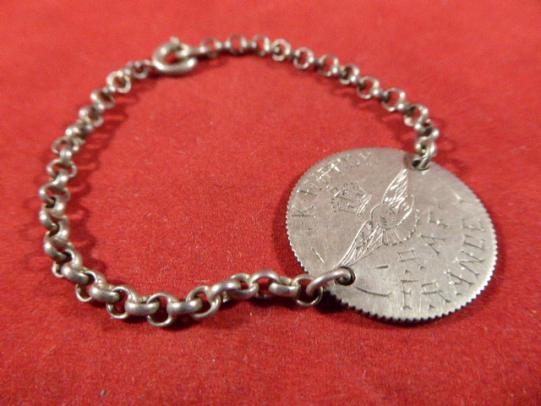 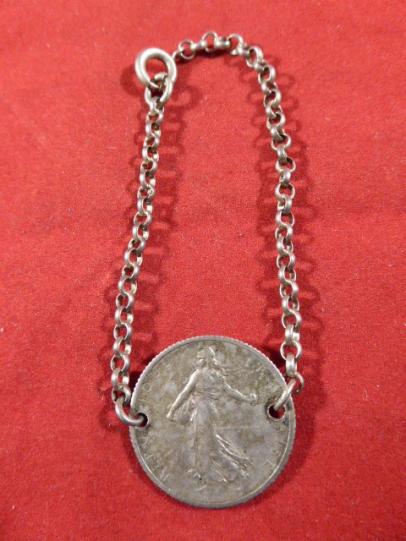 The other side has been smoothed and inscribed with the early RAF motto of the spread winged eagle and Kings crown, below which are the letters RAF FRANCE and at the top is the owners name, which looks to be:

The “A” has been rubbed so is hard to read.

Given the RAF only formed in name in 1918, I guess this is a late WW1 piece owned by a person based at a RAF station on the French battle lines.

A rare find that is in great condition and worth researching the RAF owners service history….. who knows what it might uncover.

Identity discs - known as 'cold-meat tickets' to the British soldiery of the Great War - have not always been worn in battle. The first tags were a mid-nineteenth century German innovation while the British Army resorted to the use of an identity card in the uniform pocket - hardly durable. Clearly inadequate, this form of identification was replaced in 1907 by a single stamped aluminium disc, which carried the solder's name, rank, serial number, unit details and his religion. Issued to soldiers on mobilisation, the valuable aluminium was replaced by fibre in August 1914. These discs were much more appropriate than identity cards, but they had their problems; if this single disc was removed from the body, as stipulated in the 1909 Field Service Regulations, the chances of identification of the body were much reduced. Therefore in August 1916, a two-disc system ws evolved, the discs themselves carrying the same information as before, in duplicate, but this time stamped on compressed fibre discs: a green octagonal one that, it was intended, would stay with the body, and a red disc that would be taken as part of the accounting procedure. Both were to be worn on a string around the neck, the red disc suspended from the green one. Unfortunately, neither disc would last long in the damp conditions of much of the Western Front. Perhaps because of this, few soldiers had absolute faith in the discs and many commissioned or made their own identity bracelets, to be worn on the wrist.' It would appear this bracelet is one of the more durable identity discs that were a back-up to the official identity tags.